For a long time I’ve wanted to start learning Arduino building projects. The platform was like music to my ears, ever since I was a kid I collected some electronic magazines and even made a simple led blinker that promised to stay blinking for years and years on a AA battery.

I didn’t understood too much of what those magazines were listing, but I was fascinated never the less. All the diagrams were simply fascinating and mysterious. I remember drawing random electronic diagrams just for fun. I grew out of that eventually, but kept going on software becoming a software engineer.

Enter the Arduino, when I heard about that and saw how simple and straight forward those little boards were I started to dream on having one. At that time I was still living in Brazil and anything that came from the outside was much more expensive. Arduino boards were no exception, they were hard to come by and costed a lot more than what they costed in Europe or the US. While in Brazil I finally got my hands in one.

My first attempted project was Christmas lights for our tree. At the time I had no knowledge of NeoPixels, I wonder if they even existed already. I found a project that used a "TCL5940" that I just googled and found out that it is a "16-channel LED Driver w/EEprom DOT Correction & Grayscale PWM Control". I’ve simply copied the schematics into a proto-board and it worked perfectly. I had bought some RGB LEDs, that didn’t work as they had the common pin in the wrong polarity so I ended up buying a lot of red, green and blue LEDs to make my lights.

I bought a lot wires and a generic PCB board that simulates a proto-board. After that I solder all the connections with wires and when every thing was "done" I tested and nothing worked. I spend some time trying to figure out if I had made some mistake or had a bad connection, but since I had little experience and no easy access to tools I simply forgot about that. 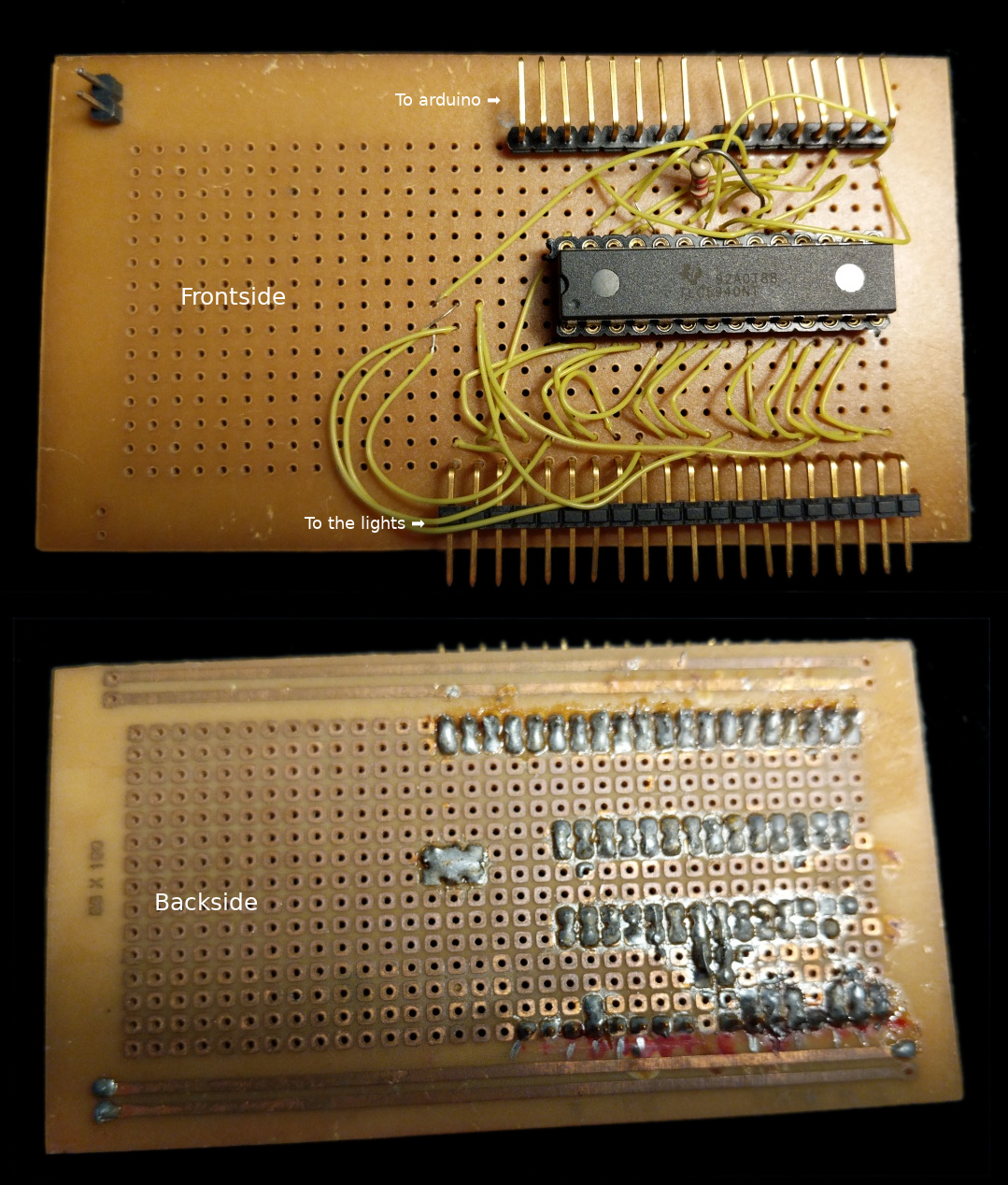 Fast forward 8 years, it’s 2017 around Christmas and my Wife was encouraging me to start a hobby. I’ve immediately remembered my old times with my Arduino 2009 board. I started to shop on Adafruit for a new board and parts. I think about restarting the old project for a Christmas gift. I adapted the idea a little as we now have a tree with pre-installed lights, the project now is to have a pot of origami flowers with neo-pixels driven by the Huzzah feather I got. I got a second plan of making a toy dice for my son, but I will talk about that on a different post.

In part for the lack of time, in part for the fact that I had bought the wrong type of neo-pixels that are way too small for me solder this flower project got on hold for a long time. During that time I had some frustration on the software side of the arduino, some of witch I addressed with a library that I wrote. But the time for the flowers was approaching…

Since I wanted this to be a surprise and my wife had a planned trip to TypeCon conference, I had a whole weekend to work on that. I also had some ideas for what would become the Mocd and wanted to experiment with it. I started to try to create the hard parts first, I wanted a glass pot but the board didn’t fit in the pot I had I bought a glass cutter to attempt to make a hole on it. That didn’t work, so I was out of luck.

My father in law visit.

Once again I had another opportunity when my father in law was visiting and my wife and son went to Vancouver with him. That gave me the time alone that I needed to finish the project.

I bought a new glass drilling bit and after some broken pots I finally had a pot ready to go on. I finished the code to fade different colors on neo-pixels that I had already soldered to a wire. All that was missing was the flowers.

I searched for origami flowers on YouTube and found this one by Jokashima. I used some wax paper, that is not very good to fold, but it has very nice optical properties. This was on late afternoon on Sunday and my wife had already texted me saying that she was on the way back (3 hours trip to Seattle).

I cut the paper and folded the flowers as fast as possible, I had 6 neo-pixels by the time she arrived I had four flowers, the pot and an old chromecast box that I had previously cut to hold the board. I decided to lodge the two last LEDs on the pot with some crumbled paper as a last minute resource, that was actually a very good solution.

The end result was very successful, my wife was very happy with her new gift.